Becoming more energy-efficient is one of the major challenges of our time. Modern societies are highly energy-dependent and thus all efforts to save this valuable resource are more than welcome. For many years, or rather decades, the responsible people, politicians and experts, have urged the importance of using less energy.

We may ask ourselves what has been achieved so far. We may equally ponder about future developments. How much more can we save?

In this posting we investigate the achievements of getting more energy-efficient in the UK from a sectorial point of view. The country can serve as a typical example of a European state trying to do both, using less energy for the same economic outcome and reinforcing its potential of renewable energies. The raw data for our analysis have been taken from UK National Statistics.

We consider the following sectors: Industry, domestic, services, passenger transport and freight transport. The energy consumption of the various sectors is measured as follows: industry (Mtoe/unit of output), domestic (Mtoe/household), services (Mtoe/unit of value added), passenger transport (Mtoe/person-km), freight transport (Mtoe/tonne-km). The transport sectors cover road transport only. In order to see how well each sector is doing compared to the others, we have indexed the quantities as 1980=100.  The results is given in the figure below. 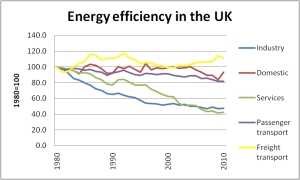 Energy efficiency in the UK for various sectors.

This picture reveals immediately who the good and the bad guys are. Let´s start with the good ones. Both industry and services managed to reduced their energy use per unit of output considerably. In fact, in 2010 British industry was able to produce more than twice as many goods per unit of energy as in 1980. Within 30 years the index went down to less than 48. The services sector was even more successful. During the same period its specific consumption plummeted to an index value of 43 only.

The situation looks quite a bit different for the other sectors with passenger transport being the most successful among those. Since 1980 the use of energy per passenger-km has decreased by almost 20 % (index 81.9). Unfortunately, freight transport cannot compete with that value. Instead its energy consumption per tonne-km went up by almost 12 % during the reference period. This finding is both, surprising and disappointing at the same time. Surprising, because car producers make us believe that modern vehicles need less gasoline than older ones. Disappointing, because freight transport is the only sector showing a clear increase in its energy hunger.

When looking at the figures for household consumption we may equally feel disappointed. There is a slight tendency to use less energy per household, with the index being at 93 in 2010. This is a rather weak performance when compared to the other sectors with the notable exception of freight transport. Countless public campagnes have been run with the clear goal of getting more energy efficient. It is hard to imagine that millions of households have not got the message. However, the results are meagre. Why is that so? Is there too little incentive for households to save energy?

Modern societies need a considerable amount of energy, which is almost entirely used the three sectors industry (including services), mobility and household, at roughly equal parts. Thus, the energy consumed at home forms a substantial part of the entire final energy use.

In this posting we study the situation in Switzerland which is one of the most competitive and industrialized countries of Europe, though not being a member of the EU. All raw data for the subsequent investigation stem from Swiss Statistics which provides excellent information on all areas of consumption. In particular, we will focus on the period 2000-2010. The above-mentioned sectors had the following shares in the total final energy consumption in 2010: industry and services 35 %, mobility 34 % and household 30 %.

Total household energy use went up by 14.1% during the first decade of this century. However, this obvious increase does not take into account that the number of people living in Switzerland has also risen during that period. Thus, the relevant figure to look at is the consumption per capita, and here the situation looks quite different as can be seen in Fig. 1. 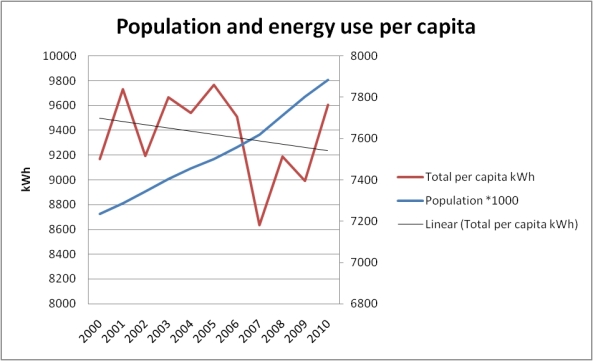 The trend line makes clear that the specific energy use per person has gone down over the years. The steep increase since 2007 is well in line with the number of heating degree days (HDD) following a similar pattern as can be seen in Fig. 2. Apparently, it has become colder between 2007 and 2010. 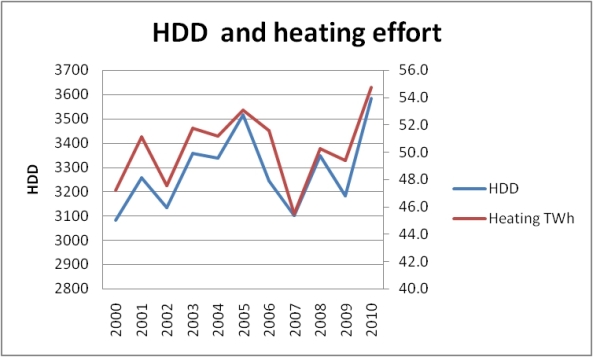 The similarity between the red curves in Figs. 1 and 2 is not accidental, as more than 72 % of total household energy are used for heating purposes (in 2010). Thus, changes in the number of heating degree days should be reflected in the heating effort. Warm water makes up for another 12 % of household use while the remaining 16 % are shared among various sectors such as lighting, cooking, washing, drying, etc.

A closer look at the figures for warm water reveals that consumption has remained relatively stable (Fig. 3).  Taking into account the growing number of households (+ 11 %) during the period in question naturally leads to the conclusion that each household uses less and less warm water. 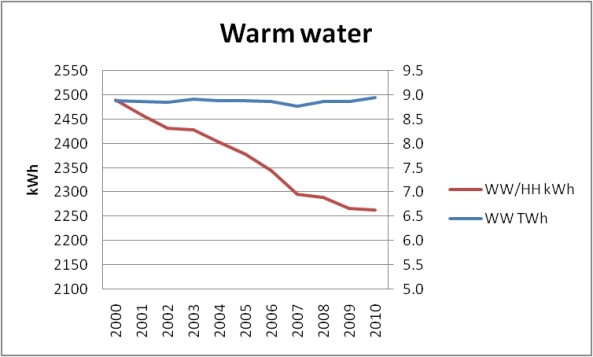 Fig. 4 shows the contribution of other sources of household energy use. Their aggregated consumption volume is relatively moderate as stated above. Nevertheless, as a whole they are not to be neglected although their individual shares are not as important as the ones for heating and warm water. 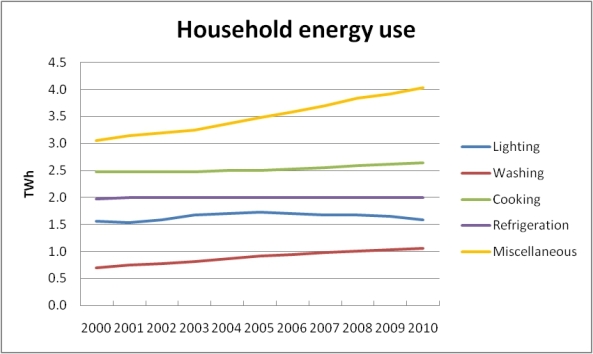 Fig. 4 Household energy use (except heating and warm water).

Whereas lighting, cooking and refrigerating (including freezing) have remained virtually unchanged over the years, washing (including drying) and miscellaneous have increased dramatically by 52 % and 32 %, respectively. This is well in line with a growing population as more people require more clothing to be washed. So there are some areas of energy consumption being more sensitive to the number of persons involved while others like lighting tend to be rather independent of population figures.

Thus, as stated in my previous posting, growing energy consumption figures (in absolute terms) should not be obscured by ignoring the simultaneous changes in the number of consumers. On an individual basis, we gradually tend to use less energy. This is the good news. But, of course, the crucial question is how much further we can get in becoming more energy efficient. Or, to put it differently, is there a limit and, if yes, where is it?

But what happens if only one side is accessible, like in a storage tank where measuring the temperature on the inner side of the vessel proves to be very difficult if not impossible? So how much energy does a hot water storage lose?

Luckily, there are solutions for measuring the heat flow by using a simple gadget. With a thermal flux sensor one may easily determine how much energy goes through a wall or a window or any other object. The sensor is attached to one side of the object and yields a signal which is directly proportional to the heat passing through the object and thus makes it possible to determine how much energy actually penetrates a window, wall, etc.

Performing such a measurement is easy and exciting as it may reveal some unexpected features of energy leaving or entering a dwelling.

We have performed a series of measurements in a house in Sweden over a couple of days and discovered some really interesting features. And yet, no sophisticated equipment was necessary. A heat flow sensor and a multimeter, that´s all it takes. The measurements took place during the last week of February 2012. Let us have a look at the results before we start discussing them in more detail (Fig. 1). 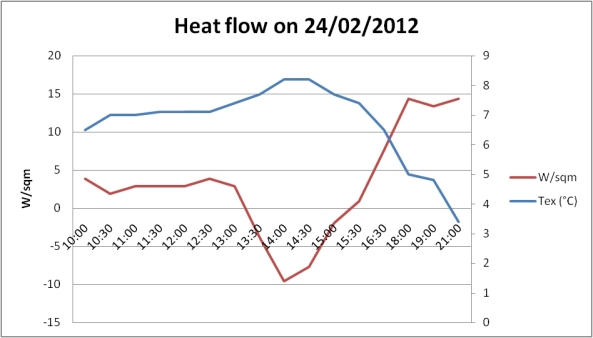 Fig. 1 Measuring the heat flow through a window.

The red curve shows the heat flow through a window facing a westerly direction. The outside temperature was approximately 7 °C in the morning. During the entire morning until 12:30 hrs the heat flow was relatively stable at about 3 W/sqm. Then shortly after 13:00 the sun slowly started finding its way through the window leading to a massive change in energy flow. In fact, we even observed an inversion of the energy flux, i.e. more energy was entering the living room than leaving it. This situation when the sun was delivering free energy through the window lasted until 15:30. Then it disappeared behind a nearby forest, and the energy flux got back to its normal behaviour which was governed by the temperature difference between the living room and the exterior. It goes without saying that during those hours of direct sun exposure the heating could effectively be switched off.

During the late afternoon a significant drop in outside temperature occurred (blue curve) while simultaneously the flow of energy was rapidly increasing reaching a plateau at almost 15 W/sqm after 18:00 hrs. Since at that time it was already dark outside the heat flow was no longer overlapped by indirect solar irradiation.

Now we are in a position to calculate the net heat flow during the measurement period. The heat loss was strongest in the evening when the outside temperature dropped drastically. During the early afternoon we had a net inflow of energy. The overall heat flow balance amounts to 0.063 kWh/sqm going through the window. Thus, by using relatively simple means we could perform a thermal analysis of a window.

The experimental setup is shown in Fig. 2. 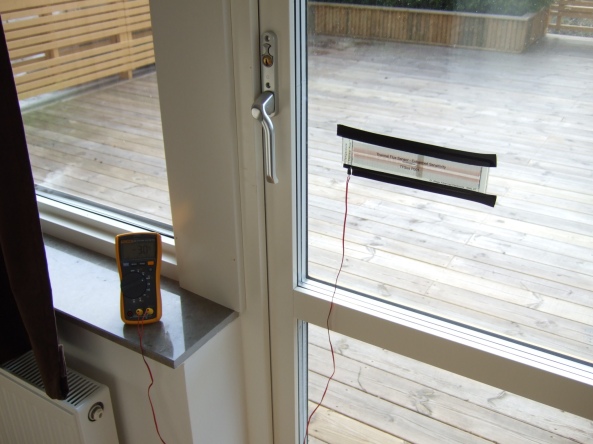 Fig. 2  Measuring the heat flow via a heat flow sensor

In a recent report we analysed the savings potential of the Swedish housing sector. Sweden has committed herself to save some 12.8 Mtoe of primary energy up to 2020. Taking into account that the country used some 51.4 Mtoe in 2010, and with a consumption goal in 2020 of about 41 Mtoe, this means that savings of some 20 % within the remaining decade are at stake.

One of the biggest savings potentials is supposed to be hidden in the building stock. Household energy use accounts for 23 % of the total final energy consumption in Sweden and the largest part of it is eaten up by heating purposes. In the following we look into the consumption figures for heating and warm water in Swedish households. The raw data for our investigation have been taken from Eurostat, Statistics Sweden and the Swedish Energy Agency.

The average energy consumption in kWh/sqm according to year of construction is distributed as follows: 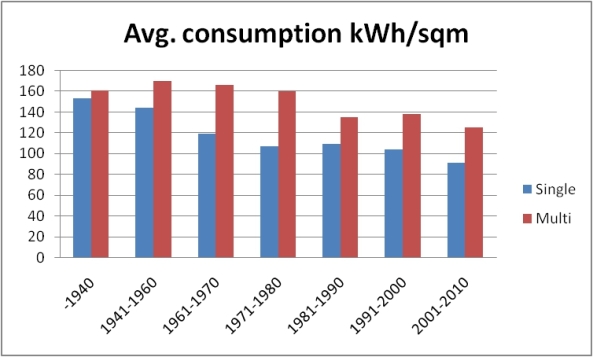 The latest construction types use significantly less energy per sqm than the older ones. This is in line with our expectations. For single dwellings average consumption has dropped by some 40 % from 153 kWh/sqm to 91 kWh/sqm. For multi-dwellings the decrease was not as dramatic. Nevertheless, average consumption went down from its maximum value of 170 kWh/sqm to 125 kWh/sqm (26 %).

The consumption figures per category are displayed in Fig. 2. 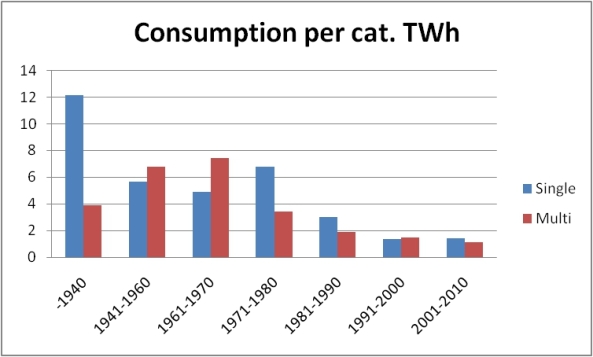 Fig. 2 Energy consumption for heating and warm water by year of construction.

Taking the latest construction technology as a reference, we may calculate how much energy could be saved if the entire building stock was refurbished according to that standard. The results are shown in Fig. 3. 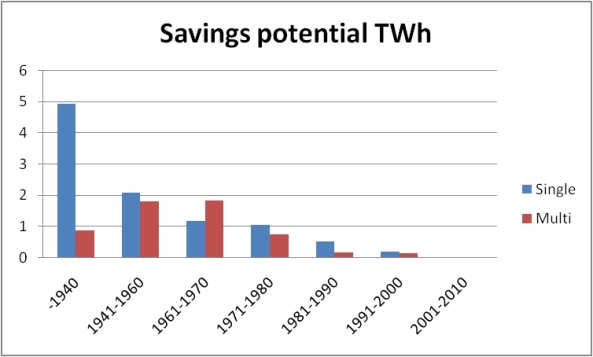 As regards the single housing sector refurbishing the oldest part of it would account for 50 % of the total savings potential of that sector. Obviously, the younger part of the building stock would only contribute very little (2 %) to the entire potential.  In total, we could expect to save some 9.9 TWh for single dwellings and 5.5 TWh for multi-dwellings. Thus the entire savings potential from the housing sector would amount to 15.4 TWh which corresponds to 24 % of all energy used for heating and warm water.

This is an impressive number although in terms of Mtoe its equivalent is a mere 1.3 Mtoe. Thus we may conclude that renovating the Swedish housing stock would provide savings of about 10 % of the entire reduction goal set by the Swedish government (12.8 Mtoe). Having said that we have to admit that the biggest part of the task is still to be done.